Coming off a special and a successful season, one in which it celebrated its 70th anniversary with a pair of trophies, Zalgiris Kaunas approaches another season with high ambitions. Last season a James Anderson three-point play with 2.5 seconds to go in the Euroleague regular season finale lifted the Lithuanian powerhouse to the next round. Zalgiris finished the Top 16 with a 5-9 record, but continued its dominance at home. It swept through the Lithuanian League playoffs, including a 4-0 series win over archrival Lietuvos Rytas to lift its fifth consecutive title, and it also won its first Lithuanian Cup in three years. Keeping the bar high and adding to its trophy collection is a thing of pride for the club that was founded in 1944 by the best basketball players in Kaunas. Zalgiris needed just three years to win its first Soviet title. It became Soviet champion four other times – in 1951 and from 1985 to 1987, the latter period going down as the team’s first golden age. With legends Arvydas Sabonis, Sergejus Jovaisa, Rimas Kurtinaitis and Valdemaras Chomicius taking charge, Zalgiris reached the Saporta Cup final in 1984, but lost to Barcelona. Zalgiris did even better in 1986 when it advanced to the Euroleague Championship Game only to lose the crown to Cibona and Drazen Petrovic. Following independence for Lithuania in 1990, Zalgiris won the first nine Lithuanian League championships, thus creating a dynasty. In 1998, it lifted its first-ever European trophy, the Saporta Cup, by downing Adecco Milano 82-67 in the title game behind 35 points from Saulius Stombergas. A year later, Zalgiris shocked the continent by winning the 1999 Euroleague title with a fun-to-watch offensive style that influenced the sport heading into a new century. The cast of stars including Tyus Edney, Stombergas, Anthony Bowie, Eurelijus Zukauskas, Jiri Zidek and Coach Jonas Kazlauskas helped Zalgiris show that up-tempo basketball could also win titles. Zalgiris came within a shot of the Euroleague Final Four in 2004 – Sabonis’s retirement season – before eventual champion Maccabi Tel Aviv won their do-or-die Top 16 finale in overtime in epic fashion. Zalgiris continued to win Lithuanian League titles from 2003 to 2005, the year in which the club also became the first to win the Baltic League. With Sabonis backing the team as president. Zalgiris lifted three trophies – the Baltic League, Lithuanian League and Lithuanian Cup – in 2008, 2011 and 2012. In the 2012-13 season, Zalgiris successfully defended its Lithuanian League crown, reached the VTB League semifinals and won its Euroleague regular season group, but did not advance past the Top 16 despite a respectable 6-8 record. In 2013-14, Zalgiris won its fourth consecutive Lithuanian League title, and got back to the Top 16, a trend the team continued with last season, and Zalgiris intends to follow it again as fantastic crowds at Zalgirio Arena are set to watch their beloved club compete at the highest levels, and contend for more trophies.
Zalgiris Kaunas faced Lokomotiv Kuban at  Round 1 Turkish Airlines Euroleague. Zalgiris Kaunas was defeated by Lokomotiv Kuban 74-76. Zalgiris Kaunas won Round 2 against Zielona Gora.
Zalgiris Kaunas at 1st place Lithuanian League after 6 weeks. 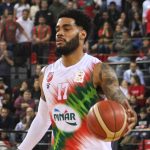 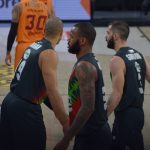 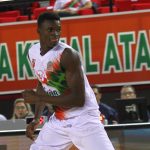 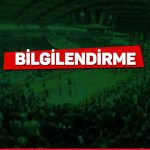